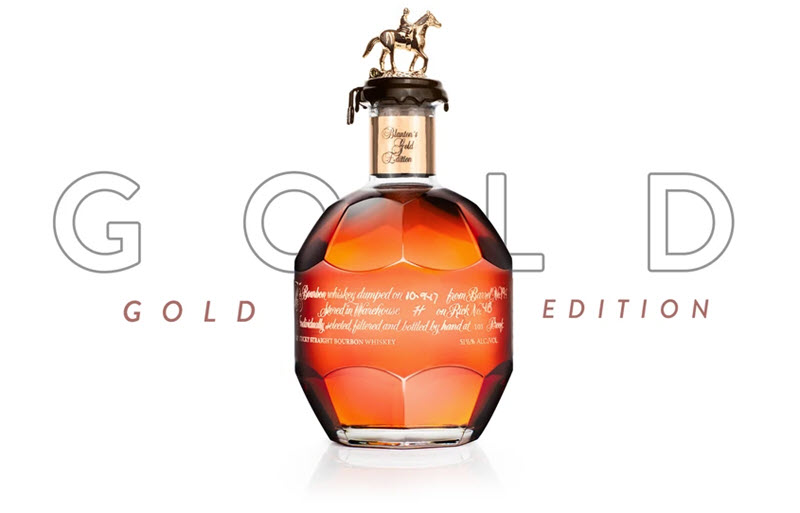 One of Buffalo Trace Distillery’s top brands, Blanton’s has announced that they will for the first time, release its Blanton’s Gold Edition here at home in the United States of America.

Traditionally, Blanton’s Gold Edition was previously only sold to select markets outside of the United States. Bottled at 103 proof, we feel it provides a fuller flavor profile while still remaining approachable and smooth. We still find it fascinating to see how small variations in the proofing process can really change the character and bring out the flavor profile of a bourbon.

Buffalo Trace Distillery has plans to make this an annual limited release starting later this year. We are giddy and can not wait to taste this fine bourbon again. Until then, you can read all about it in the official press release below. Cheers!

Buffalo Trace Distillery Announces Blanton’s Gold will be Available in the U.S.

Fans of Blanton’s Single Barrel Bourbon have long asked for the Gold Edition to be available in the United States. This summer those bourbon lovers will get their wish. Available as a limited release in 2020, Blanton’s Gold will be released once every year in the U.S.

We’ve seen Blanton’s soar in popularity over the last few years, and fans have asked us for the Gold version in the U.S. too,” said Kris Comstock, senior marketing director.
“We’re thrilled to fulfill their requests this summer. ”

Tasting notes for Blanton’s Gold describe it as having a nose marked by honey, heavy rye, dried fruits, vanilla, and chocolate. The taste is described as full and rich, marked by apricot, butter, pepper, light honey, and oak. The finish has been called long, with toffee and apple, developing on pecan and caramel.

Blanton’s Single Barrel Bourbon is the world’s first single barrel bourbon, created in 1984 by Elmer T. Lee. Named after former distillery president Colonel Albert B. Blanton, Elmer recalled how Colonel Blanton would handpick “honey barrels” from the center cut of Warehouse H for the many parties Blanton held. Many years later, the Distillery called upon Elmer to create a new bourbon in 1984 and Blanton’s was born – the world’s first single barrel bourbon.

Today, Blanton’s Single Barrel has become one of the most revered and award winning bourbons on the market. The Blanton’s Gold Edition was the second version created, after the Original 93 proof. Gold will be available in the U.S. on a very limited basis for a suggested retail price of $120. For more information on Blanton’s Gold Edition visit www.blantonsbourbon.com.

Buffalo Trace Distillery is an American family-owned company based in Frankfort, Franklin County, Kentucky. The Distillery’s rich tradition dates back to 1773 and includes such legends as E.H. Taylor, Jr., George T. Stagg, Albert B. Blanton, Orville Schupp, and Elmer T. Lee. Buffalo Trace Distillery is a fully operational Distillery producing bourbon, rye and vodka on site and is a National Historic Landmark as well as is listed on the National Register of Historic Places.

The Distillery has won 35 distillery titles since 2000 from such notable publications as Whisky Magazine, Whisky Advocate Magazine and Wine Enthusiast Magazine. Its Col. E. H. Taylor, Jr. Four Grain Bourbon was named World Whiskey of the Year by “Jim Murray’s Whiskey Bible 2018” and its William Larue Weller and Thomas H. Handy Sazerac were named 2nd and 3rd finest whiskeys in the world, respectively, in the “Jim Murray Whiskey Bible 2020.” Buffalo Trace Distillery has also garnered more than 1,000 awards for its wide range of premium whiskies.